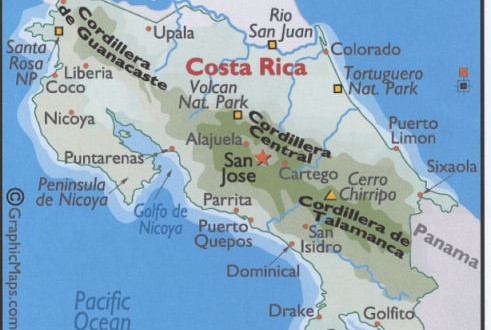 On June 13, 2005 my wife Pam and I visited the San Vicente Elementary School. It is located in Santo Domingo , Heredia , Costa Rica near the capital city of San Jose . It is a relatively new school having been founded in 1999. They held their classes in the gymnasium of neighboring school in Santo Domingo until 2003 when they were able to move into their newly constructed building. We met in the school office with English teacher Mario Sanabria and School Principal Kattia Ocampo. They visited the classes with us as we distributed the dictionaries. We gave out 48, Webster’s Spanish-English Dictionary for Students , to the 3rd and 4th grade students and 60, Webster’s Worldwide Spanish-English Dictionary , to the 5th and 6th grade students. We were able to speak with the students in both Spanish and English. The students were so alert and fun to be with and teachers were great. The teachers really appreciated the dictionaries and the children loved them. The fact that they came from the United States made them that much more special. Even though Costa Rica has the best educational system and the highest literacy rate in Central America books are extremely expensive and for the students to have their own personal dictionary is considered a privilege. Most of the students come from low income, single parent homes and this possibility was never dreamed possible. Mr. Sanabria said that he and the children’s parents noticed an immediate improvement in the students. They were more confident in their use of English and the dictionaries seemed to reinforce their choice of words. They have really begun to enjoy English class and are using the dictionaries on their own. He has dictionary competitions and games for them and has them “look up” words that are related to what they are studying. Mario told me in a recent letter that the dictionaries have motivated and encouraged the students to reach levels he did not think possible. We plan to return to the school in June with A Students Dictionary for the 5th and 6th grade students, so they can really focus on English and Webster’s Spanish-English Dictionary for Students for the new 3rd graders. Thanks again, Bill Thornton