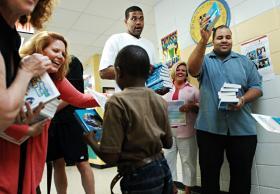 Joretta Akpo-Sanni is for anything that will promote learning in her students.

`This shows that the community is working together and partnering with education,` said Akpo-Sanni, Barton Chapel Elementary School`s principal, about a special presentation at her school Monday.

The Four-Way Test Coloring Book teaches children the four questions that are the hallmark of Rotary International: `Is it the truth?` `Is it fair to all concerned?` `Will it build good will and better friendships?` and `Will it be beneficial to all concerned?`

`A lot of schools really need dictionaries, and for some of the students, they have none at home,` she said.

Lightsey said the club has also distributed dictionaries at Glenn Hills Elementary School, and it has received positive feedback.

`We get letters saying they learn new words, and they read it every night,` she said. `If it makes a difference in the life of one child, it`s worth it.`

The major fundraiser for the club is a spaghetti dinner, which was held this year in February. Cassandra King, the wife of author Pat Conroy, was the featured speaker at the Feb. 4 event. The dictionaries have a list of presidents and biographies, the U.S. Constitution, the Declaration of Independence and a guide to the 50 states with a map showing the location of each one.