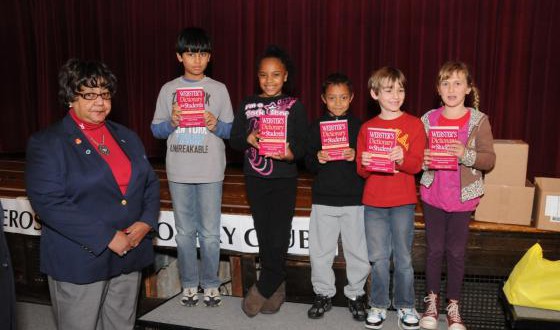 Why dictionaries? Why third grade?

Dictionaries are the first reference tool students use. One of Rotary Club International`s missions is to focus on literacy, since literacy is at the heart of poverty reduction and economic development. Owning a dictionary goes beyond just spell checking, it promotes self reliance and resourcefulness by `looking it up`. Third grade was chosen because by the end of the year, students should be better writers, avid readers and creative thinkers.

Before handing out the books, Rotary member John Mousseau had students point to a word on a open page. He then asked the crowd if they knew what the word meant. Over 100 hands went up. Some of the answers were spot on, some weren`t. But the enthusiasm continued as they received their very own copy. As the students filtered out of the auditorium, their heads were buried in their new book, looking up words and asking their classmates if the knew what it meant.