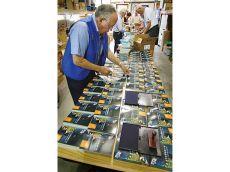 An assembly line of sorts was in full swing Wednesday morning in the Yuma Elementary School District 1 warehouse, where Rotary Club members gathered to stamp and put stickers on approximately 3,128 dictionaries, which will be distributed to every third-grader in Yuma County. It’s called The Dictionary Project, which the Rotary International Literacy Program participates in each year. Locally, the project got underway in 2000 at three elementary schools in Somerton. In 2005 it spread to all of the elementary schools in Yuma County, said Dr. Richard Geyer, local chairman for the project.