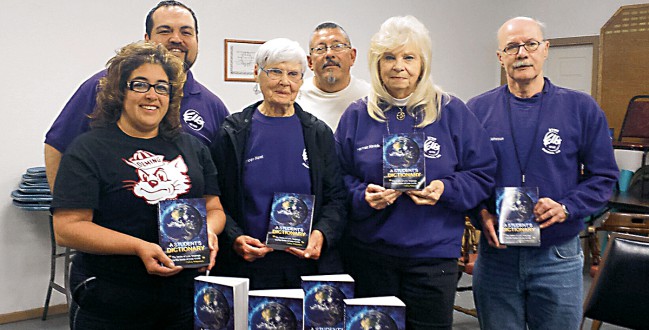 The Deming Elks Lodge distributed more than 500 dictionaries to third graders in Deming and Truth or Consequences, NM. The dictionaries were distributed as part of the Elks’ National Dictionary Project — a project with the stated goal of getting dictionaries in the hands of every third grader in the United States. Since its implementation in 1995, over 18 million children have received dictionaries because thousands of people saw the need in communities all over the United States to help with literacy. The Deming Elks began the annual distribution here in 2005…[and]… began distributing dictionaries to third graders in there Sierra County city. The goal of this program is to assist all students in completing the school year as good writers, active readers and creative thinkers by providing students with their own personal dictionary. The dictionaries are a gift to each student to use at school and at home for years to come. This year the Elks distributed dictionaries which included historic information about U.S. Presidents, information on the U.S. Constitution and facts on countries around the world. On hand to distribute dictionaries to our local third graders are Loyal Knight and youth activities chairman Yvonne Jasso-Perales and Leading Knight Jerry Pingelton. The dictionary project is just one of many projects the local Elk’s Lodge participates in for youth in the community. Read More: http://www.demingheadlight.com/deming-news/ci_27009647/local-elks-hand-out-dictionaries
Deming, Elks Lodge, New Mexico, personal dictionary