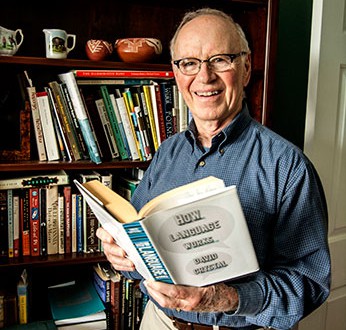 Logovoracious – Written by Joe McKay There’s no such word in the dictionary, and as I type it, Microsoft Word protests by underlining it in scarlet red. MW aims to throw cold water on my lust for new words. And, yet again, I feel for Hester Prynne! The fact that I am a conscious locavore … one who tries to eat locally raised food, coupled with my frequently thinking, “Oh, what a delicious phrase!” (e.g., “cosmic unity”), or “Mouthing that word is like eating a ripe plum,” (e.g., “fumarole”), led me to craft what I imagined was my own invented word, logovore. … one who eats words… as in the line from Mark Strand’s poem: “Ink runs from the corners of my mouth./ There is no happiness like mine./ I have been eating poetry.” (I did have the presence of mind to Google it before offering it to the word world as my own creation. With mixed reaction, I found that Joseph Nacino in the Phillipines, used to write a blog, “Logovore.” He says he “lives and breathes words.”) Go, Joe! But why is it necessary to define logovore, when we already have logophile… one who loves words? Because, I think, although it’s figurative (no one really eats words!), it conveys more intensity than “logophile.” One who is logovoracious faithfully looks up words he doesn’t know, gorges on etymology, thumbs through the dictionary as though on an exploratory outing, begs, borrows, or makes up new words when he/she needs them, and eats up original word-crafted writing … as I do with this bit, from a review of My Saga by Slate’s Katy Waldman …. “Karl Ove Knaussgaard is the world’s worst travel writer. As if he’d wrought his prose from some insight-resistant material… (he leaves you to) wonder: Is this boredom I feel? Or drafts from the invisible wings of genius? Does it matter?” Let’s look at a few words that have come into our language thanks to pushy logovores who at various times in the past were willing to buck convention … “There’s no such word!” “Decimate” was adopted from Greek/Latin to enable the expression in one word of “killing only ten percent of a population” … it was later extended to mean “killing a percentage, but not all of…” It was necessary to borrow this word in order to refine the Anglo-Saxon “kill.” It is one of hundreds of “inkhorn terms,” words brought into English from Latin and Greek between 1500-1700, by writers pushing the bounds of the language, who sought more descriptive words than were available in the clipped Anglo-Saxon. Language purists of the time decried the use of inkhorn terms for being “unnecessary and pretentious.” Influential Cambridge Prof Sir John Cheke opined, “… our own tung should be written cleane and pure, unmixt and unmangeled with borrowing of other tungs.” He should bite his tung! Similarly, by introducing the word “location” (from the Latin “locus”) in the late 16th century, a logovore spared us having to use “whereness,” the only possible Anglo-Saxon construction to express the idea. And Latin “merge” gave us an alternative to “yoke.” (Notice the more sibilant sounds of Latin compared to the harsher and more blunt sounds of A-S.) Latin derivative “loquacious” made it possible say something other than “talky.” “Havoc,” originally an A-S call to an Army to “begin to plunder” was later alternatively expressed as “pandemonium” … from Greek pan+demons, all the demons. Logovores have introduced words that stuck with us (many didn’t!) over the centuries since. Bungalow … from Hindi, ‘belonging to Bengal,’ was first used in English in the late 1600s. Khaki … from Urdu, ‘dust-colored,’ in 1848. “Reefer” came into use in the early 20th century as an abbreviation of ‘refrigerated’ to describe a refrigerated ship, railroad car, or truck; a few years later, in the 1930s, the same word, but this time describing a marijuana cigarette, came into English from Mexico. Lewis Carroll in Through The Looking Glass (1871) delighted readers with his “portmanteau words,” combinations of two shortened words to create a fresh concept. It became a fad, which in the years that followed, gave us brunch, motel, gerrymander, infomercial, and many more. Ultimately, it is the expression of ideas through words that we’re seeking from language. The Greek word “logo” means “idea” as well as “word;” the two are “inextricably” (another word borrowed from Latin in the late 16th century) intertwined. It is a fact, according to the Global Language Monitor, that the English language now produces a new word every 98 minutes. It’s great to have so many logovores loose in the world! Order “Crazy About Words” from Amazon
Crazy About Words, Joe McKay