pil·lar/ˈpilər/, noun: 1. a tall vertical structure of stone, wood, or metal, used as a support for a building, or used as an ornament or monument. “The carrying power of a bridge is not the average strength of the pillars, but the strength of the weakest pillar. I have always believed that you do not measure the health of a society by GNP but by the condition of its worst off.” Zygmunt Bauman, 1925 – 2. a person or thing regarded as reliably providing essential support for something. “The spirit of truth and the spirit of freedom – these are the pillars of society.” Henrik Ibsen, 1828 – 1906 “Hope is the pillar that holds up the world. Hope is the dream of a waking man.” Pliny the Elder, 23 BC – 79 BC pictured above: Pompano Beach-Lighthouse Rotarian Bill Zobus with happy third grade students on distribution day. The Pompano Beach-Lighthouse Rotary Club started their signature project on November 10, 2007. Five club members entered Charles Drew Elementary School in Pompano Beach that day armed with boxes of dictionaries. It took all five members to personally deliver a dictionary to each of the third graders, advising the book was for them to keep for life. Of the original five, three are still members of the club.    Later that year, the balance of the elementary schools in Pompano Beach also received a personal dictionary. As the project gained popularity and the club budgeted more funds, other communities were added to their project: Coconut Creek, then North Lauderdale and finally West Park. Before the books are delivered a label is placed inside each dictionary so that the club will receive recognition for helping students in their education process. This year it took 12 Rotarians and friends of Rotary about 1 1/2 hours to apply the label in each book. Even President Nello Biordi helped with the work. No one is exempt! 🙂 After labeling is complete, Rotarians form teams of two and deliver the books to two schools each. Depending on the size of the school, it will take one to two hours to personally hand each student his/her new learning tool. The students are advised to put their name inside their new treasurer and members explain the importance of learning dictionary skills. Since the start of their project, members of the Pompano Beach-Lighthouse Rotary Club have donated over 15,500 books. This being the 9th year of the project, many of the students who received books in 2007 are now seniors in High School. Dictionaries were given to 2,400 third grade students in 16 Elementary Schools in Pompano Beach, Coconut Creek, North Lauderdale and West Park in 2015. A majority of the 17 members, plus a few visiting Rotarians, and friends of Rotary helped with the annual community service project. This year’s donation was partially funded by a Rotary Grant from Rotary District 6990, Publix Charities and club funds. 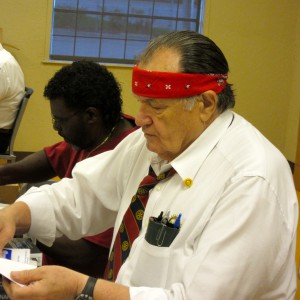 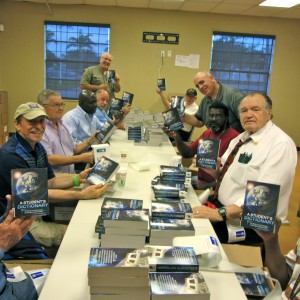 Who doesn’t love a labeling party?