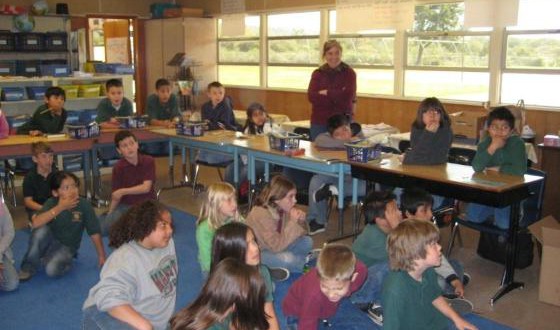 Mrs. Jean Albrecht, DAR Regent, and Mrs. Nancy C. Thompson, DAR Historian, presented the dictionaries to the classes of Nicole Hersh and Jane Hunter. The teachers and children were thrilled to have the dictionaries. There used to be only four dictionaries in each class room. Each child received their own dictionary and could not believe that they could keep them. Mrs. Thompson discussed the contents of the dictionary including things that can be found in back of the dictionary such as planets, maps, the American flag, Declaration of Independence and the Constitution. A question and answer period followed. One girl wanted to know if President Obama was in the list of presidents. We explained that the dictionary was published before he was elected president. Then we passed out the individual dictionaries. During the distribution a young man discovered the longest word in the dictionary. He came up to us and the teacher to say that it was not a word because the spelling was followed by a period. As you can see they were excited with their dictionaries. As we were leaving we were asked to sign their dictionaries, which we did. This was the most amazing experience for everyone involved especially the adults.

Our chapter has made this an ongoing project.

For information on Rancho Purisima Chapter of the DAR contact Mrs. Sandy Montgomery (registrar) at (805)733-1902.