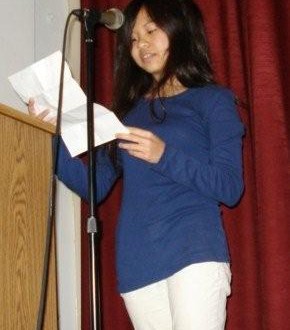 The largest `book distribution` to Philadelphia school students in the history of the Rotary Club of Philadelphia was conducted in November of 2009.

As part of its annual literacy initiatives, the Rotary Club of Philadelphia distributed more than 2,000 dictionaries, thesauruses, atlases (purchased from The Dictionary Project) as well as an array of new library books to students at five Philadelphia schools—Bryant, Folk Arts Culture and Treasures, Fell, Lowell, and Sharswood.

The delivery of the 2,000 books to the five school sites was carried out in one day by Philadelphia Rotarians Frank Hollick and Joe Batory with the valuable help of Philadelphia Mural Artist Joe Brenman who donated the use of his Honda Element.

At the Sharswood School in South Philadelphia on Monday, November 2, 160 dictionaries were given to the 3rd, 4th and 5th graders and 155 thesauruses were given to the 6th, 7th and 8th graders by the visiting Philadelphia Rotary delegation of Shelly Prushan, Lisa Leonard, Warren Kuo, Matthew Tae and Joe Batory, as well as Rotary Ambassador Scholars Mayo Asada and Makoto Kuwabara. Principal Maureen Skalski praised the Philadelphia Rotary for the `gifts of books,` calling Rotary`s gesture `thoughtful and significant to the lives of children.`

Philadelphia Rotarians Jeff Cabot, Kirsty Halliday, Mary Livingston, Scott Simon, Shelly Prushan, Matthew Tae and Joe Batory, as well as former Rotary Ambassador Scholar Asako Yoshino, personally handed out 156 dictionaries to the 3rd, 4th and 5th graders and 156 thesauruses to the 6th, 7th and 8th graders at the Folk Arts Culture and Treasures School in Philadelphia`s Chinatown on Wednesday, November 4. The visiting Philadelphia Rotarians were serenaded by the children and received many homemade `thank you` cards. Principal Deborah Wei told the children about Rotary`s humanitarian efforts throughout the world and noted to the Rotary members in attendance that the children were `excited and thrilled` with their new books. That was clearly obvious in the smiling faces of a `jammed` school auditorium where the ceremony took place.

At the Lowell School which houses 500 3rd and 4th graders, every child received a new dictionary on Thursday, November 5. `You will never fully realize how much this means to our students,` said Principal Donna Runner. `Your gifts of books and personal concern for our children matter so very much.` Philadelphia Rotarians Joe Batory, Ellen Williams, Frank Hollick and Mark Raschiatore conducted the distribution of books. The Lowell School also received 24 `Spanish to English` books for use with its large immigrant population and `Spirit of Philadelphia` library books for each classroom.

The Bryant School book distribution event on Friday, November 6, was attended by Philadelphia Rotarians Frank Hollick, Bob Snow (President), Sharon Quick and John Forer as well as former Rotary Ambassador Scholar Mayumi Kusunose. 360 dictionaries and thesauruses were donated to students at the school. `This means so much to our children and staff,` said Principal Jala Pearson. `These books are truly a practical contribution to the education of hundreds of children. Thank you so much.`

The final book distribution was at the Fell School in South Philadelphia on Monday, November 9. Philadelphia Rotary members, Shelly Prushan, Nancy Magagna, Scott Grande, Matthew Tae and Joe Batory were on hand to distribute 225 thesauruses to the school`s 6th, 7th and 8th graders. Principal Eleanor Walls described the donation of books as timely and fabulous `educational gifts` for the students.