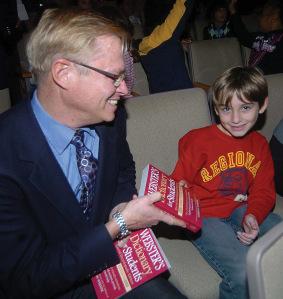 In the auditorium at Tuscan School on Nov. 1, third-graders threw their arms high above their heads when John R. Mousseau, a member of the Maplewood Rotary Club, asked them a question.
`What is the definition of the word handy?` he asked a roomful of eager pint-sized students, bouncing out of their seats just to get noticed.
Mousseau picked a brown-haired girl seated around the tenth row. She said: `It means like, to be, umm … helping other people.`
`That`s right,` Mousseau answered, peering in a red-covered Webster`s dictionary. `It means helpful.`
Lending a helping hand was the focus of the assembly led by the South Orange and Maplewood Rotary clubs, part of a service organization called Rotary International. In its ninth year, both clubs have teamed up to distribute dictionaries to third-graders at all local elementary schools.
The Dictionary Project is aimed to aid third-grade teachers in their goal to enhance students` abilities to read and write, as well as become creative thinkers. `This helps people learn and how to read,` said Janice Teetsell, past governor of Rotary District 7470, which represents 54 clubs in Essex, Morris, Warren and Sussex counties. `This very little project is now an international project.`
Teetsell, a member of the South Orange Rotary, said The Dictionary Project made third-graders the primary target because that is the age where new techniques on `reading and writing` are absorbed the fastest.
According to the project`s website, `The idea for The Dictionary Project began in 1992 when Annie Plummer of Savannah, Ga., gave 50 dictionaries to children who attended a school close to her home.`
However, the project was officially on the map when Mary French `and her husband Arno French formed a nonprofit association in 1995, along with a Board of Directors. Arno served as president, Mary became the director of the association and The Dictionary Project was born,` according to the website.
Throughout the past two weeks, the Maplewood and South Orange Rotary Clubs have distributed more than 600 dictionaries, which were brought from monies raised at Rotary fundraisers.
`The feedback (from parents) is terrific,` Rick Rafferty, president of the Maplewood Rotary. `We get written letters and phone calls from parents and children thanking us for their dictionaries.`
Rafferty, who has been a member of Maplewood Rotary for 18 years, encouraged the students to investigate their local Rotary Clubs and think about becoming a member in the future.
He told them about the significant contributions both the local clubs have made in times of disaster or to help out their neighbors, such as donating 140 pairs of crutches to quake-ravaged victims in Haiti and $10,000 to send medical personnel to perform heart transplants to 25 children in the Dominican Republic to organizing a Christmas tree sale for residents and sponsoring a scholarship fund at Columbia High School.
In addition, he said Rotary International has raised $100 million to eradicate polio, an acute viral infectious disease spread from person to person.
`It`s exciting, isn`t it?` assistant Principal Marianne Hess asked the students who were learning about their local Rotary Clubs.
The students responded with applause.
`I learned so much,` Hess, a Maplewood resident who also attended Tuscan as a child, said about the local Rotary Clubs, `and I have enjoyed all the things you have done.`