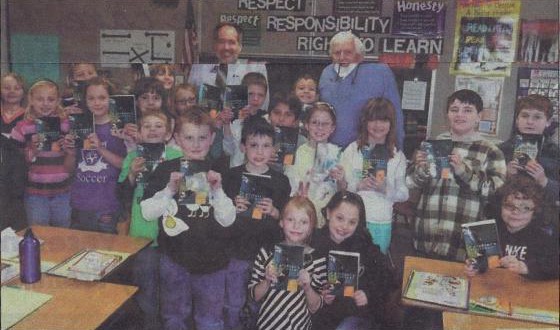 This year during February and March, the Rotary Club of Westminster 7:10 has for the fourth year given dictionaries to all third graders in Westminster.

The Club strongly believes that the ability to read is essential in a person’s tools for living and that having one’s own personal dictionary can significantly improve one’s reading skills.

This year the program provided some 1,600 third graders in 22 schools in Districts R-1, 12, and 50 with dictionaries.

The dictionaries are produced by The Dictionary Project, Inc. in South Carolina, an organization created to provide a dictionary to students to help with their homework and their schoolwork.

Throughout the United States, and since 1995, more than 12 million dictionaries have been provided at a nominal cost and have been distributed by Rotary Clubs and other organizations.

This year in Colorado, 33,778 dictionaries have been given to third graders, and 13 Rotary Clubs have participated in the project.

The dictionaries contain resource materials above and beyond just words.

Included are weights and measures, The Declaration of Independence, The U. S. Constitution, maps of the world, facts about countries, information about the 50 United States, biographies of the 44 U. S. Presidents and facts about the eight planets in the solar system.

The kids love to see the longest word in the English language, which begins with ‘methionylglutaminy’ and continues for another 1,891 letters. It is a term for an enzyme that contains 267 amino acids.