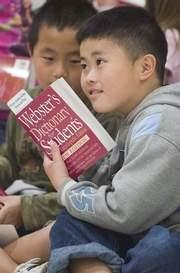 dic-tion-ary (n.): a book of alphabetically listed words in a language, with definitions, etymologies, pronunciations and other information.

In other words, a place to look things up, and the third-graders at Wilson Elementary School in Sheboygan already knew that much. But now all 96 of them have their own paperback copy of Webster`s Dictionary for Students after a Friday afternoon visit from members of Sheboygan Elks Lodge 299.

`Usually dictionaries cost money and they`re in bookstores,` said Kody, 9, clutching his own Webster`s as if he had just been handed a winning lottery ticket.

Last year the Elks distributed 800 dictionaries to third-graders in Sheboygan`s public schools. But this year they expanded the program to all third-graders in the county, making deliveries as far as Fredonia and giving out about 1,600 this past week.

`It went over so well last year,` said Shawn Theune of the Elks, whose daughter Hallie is a third-grader at Wilson.

Tom Binder, Wilson`s principal, said third grade is the ideal developmental level for the dictionaries to be introduced.

`The younger ones have mainly picture dictionaries,` he said. `Third grade is the perfect level to switch into word dictionaries. There`s a lot of emphasis on vocabulary. Every classroom teaches how to use (the dictionary) for pronunciation, meaning and usage.`

Webster`s Dictionary for Students is geared to the 7-to-11 age range, and a project called `Word a Day` is in place at Wilson to help build young vocabularies.

`It`s important to get a dictionary in their hands,` said Dvorak, who has taught at the school for 23 years. `Some of them don`t even have a dictionary at home. It instills a love of the English language.`

Ger, 8, was happy to have one that he could call his own.

`We have a different kind of dictionary at home,` he said.

The Elks order the dictionaries through The Dictionary Project, a South Carolina-based nonprofit organization that coordinated the distribution of more than 2.3 million dictionaries across the country in the 2007-08 school year. The goal for this year is 4.1 million.