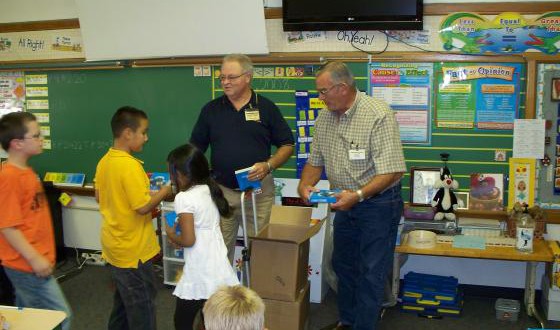 Barbarakay Royuk has a favorite saying: `The dictionary is a student`s best friend.`

`I think every child needs to have a dictionary to find new words,` the fourth-grade teacher at Trinity Lutheran School in Fremont said.

Now, thanks to the Fremont Noon Kiwanis Club, her fourth-grade class along with every third-grade student in Fremont Public Schools, Archbishop Bergan Catholic Elementary and Trinity has one.Wednesday and Thursday, Kiwanis members spread out across Fremont, delivering the dictionaries, which were purchased through The Dictionary Project. That non-profit group aims to put a dictionary in the hand of every third-grade student in the nation.
`They figure third grade is about the time students learn to read and use a dictionary,` Kiwanis member Gary Fouraker said as he can Lon Olson prepared to hand out dictionaries to Trinity students Thursday.

`Having a book is really important,` Olson added.

Besides the usual list of words and definitions, the dictionaries distributed to students contained biographical information on each of the U.S. presidents, maps, measurement tables, and information about each state.

By the time Kiwanis members were done with the distribution, about 400 dictionaries had been given to students and their teachers.

The $750 needed for this year`s project was raised through donations from Kiwanis members. Organizations have several options on they type of dictionary to purchase.

It was the second year for the project, which had its roots from a visit to Florida.

Miriam Voss learned about the project while attending a Kiwanis meeting in Florida. She presented the idea to the club and it`s taken off.

`We hope to do it every year,` Fouraker said.
Kiwanis in heavily involved with literacy. Members routinely read to Head Start students and make book donations to that agency.

Club members also have distributed Reading Is Fundamental books to students in the past.

Fremont isn`t the only Nebraska community where a civic organization has donated dictionaries to students. Kiwanis and Rotary clubs in cities such as Bellevue, Grand Island, Elkhorn and Kimball have been involved. Last year, more than 15,000 dictionaries were distributed in the state.