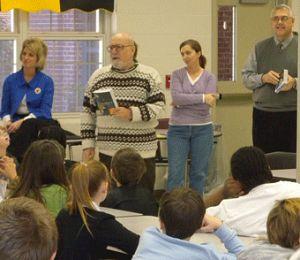 Do you know what the longest word in the English language is? Third graders at Johnsonville and Hemingway Elementary Schools do, thanks to the members of the Johnsonville Lions Club.
For the last seven years or so, the local Lions Club has donated dictionaries to third graders at the elementary schools of the Twin Cities. It is part of an initiative known as The Dictionary Project, run by a group based out of Charleston, SC, which provides dictionaries to area clubs and groups to be given to local school kids.

Lions Peter Knoller and Randy Smiley delivered the books to both schools this year. The pair are normally the ones who undertake the task of bringing the dictionaries to the students, and Knoller said he relishes every minute of it.

‘I love it,’ Knoller said. ‘I’ve been doing it now since we started.’

Knoller, more-or-less, serves as the emcee of the brief presentation and said he enjoys chatting with the students and having a little fun with others who happen to be at the event. Part of that fun includes challenging someone to read the longest word in the English language. The word, which is of the scientific variety, measures more than a thousand letters and takes up the entire last page of the student’s dictionaries.

This year, the honor of reading the word went to the editor of a local newspaper who, despite a valiant attempt, was unable to complete the task.

‘It used to be done by the Rotary Club out of Florence,’ he said, describing how the Johnsonville Lions Club came to be a part of the project. ‘When they Rotary out of Florence ran out of money we took it over. This marks maybe the fifth year. Its been going on quite some time before that.’

‘With some of these children, this may be the first new book that they’ve ever gotten,’ Smiley, assistant superintendent of Florence School District Five said. ‘Which is really pretty neat. They like getting new books.’