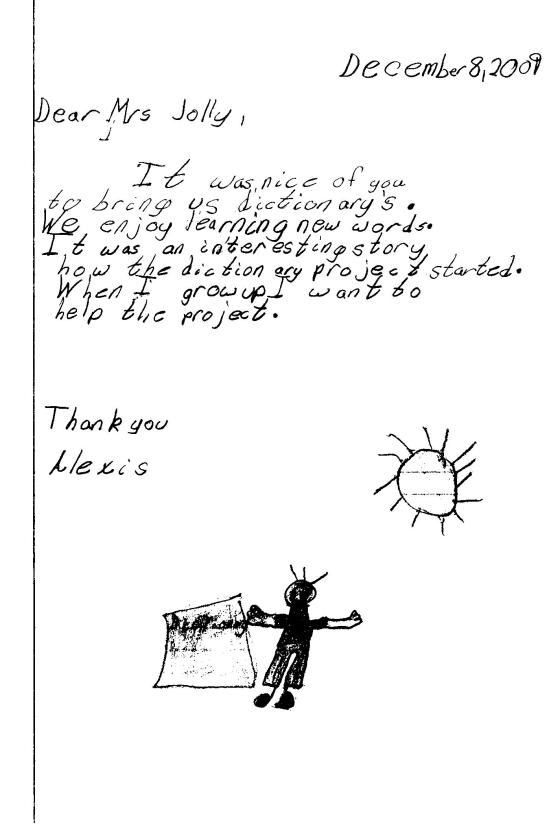 Thank-you cards to the organizations noted a variety of appreciation:

‘Thank you very much for your dictionaries. They’re, like, the newest kind. They have all this amazing stuff to help students in school.’—Evelyn; ‘I can find words I need in it, and lots of other information in the back. Doing reports and writing stories will be much easier.’—Anna; ‘My favorite part is the Roman numerals.’—Camille; ‘There is a multiplication chart to help us; there is also planets.’—Ruben; ‘The Dictionary Project is nice, Dorothy Heard, too, in her 90’s pretty cool, Dorothy’s pretty cool. Love the dictionary.’–Aaron

Recorded in the January 1 edition of the Valley Herald’s ‘Have you Heard?’ column by Dorothy Heard:

The Dictionary Project just gets longer and longer. Somehow three thank-you notes just came to me…so I’ll just pass them on to you, as I know Sandy will do when she writes the ‘official’ Dictionary story.

I don’t know the grade of the first letter writer, but I’m going to write it as it was written. Sometimes their spelling makes more sense than the ‘correct.’

‘Dear Lady RepuBlipcans: thank you verey much for the dictionary. You were very thoughtful. I will learn a lot!! Love Christal’

‘Dear Lady Repubicans: Thank you for the dictionary. That was very kind of you. I will use it every day. Thanks againy, Raven’

‘Dear Lady Repupans, Thank you for the dictionary. That was kind. Chelsie’

Note from The Dictionary Project: The Republican Women sent along several of the thank-you notes the various sponsors received from the children. Here are a few more samples:

Thank you for the dictionary. I will take good care of it. And I will let my family use it when ever they need it. And I will not let my sister’s dog chew it up, I promise.

Thank you for the Dictionaries they are helpful to me and the class. We can learn math, where the states are, sign language and brail. It also has words I’ve never heard before like grotesque, and connoisseur. It also shows you where the continents are in the world, like Australia is S.E. of the Indian Ocean.