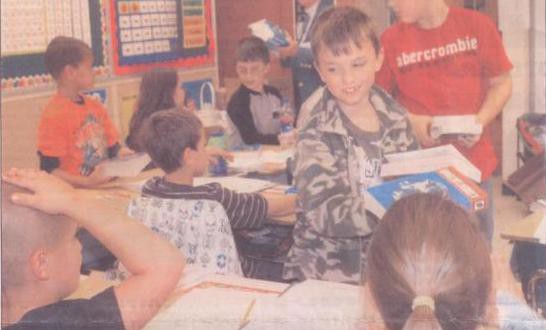 It’s unlikely St. Lawrence Central third graders will ever be asked to spell the longest English word known to mankind–all 1,909 letters of it–but they’ll have it handy in their dictionary if the need ever arises.

That word–the chemical name of the largest known protein–takes nearly a page in new dictionaries presented to the students by Dianne Meyer from the Massena Elks Lodge.

‘A Student’s Dictionary’ is designed to stay with the student for the remainder of their high school career and beyond, according to Meyer, who was joined by Bill LaPoint from the Potsdam Elks Lodge and elementary principal Lisa Grenville for the dictionary presentations.

‘They have a very special gift for you today, something I hope you’ll cherish,’ Grenville told the students in each of St. Lawrence Central’s third-grade classrooms.

She also received a dictionary, as did each of the third-grade teachers.

Last year the Elks presented the dictionaries to students during an assembly in the gym and explained how to use it. This year Meyer, LaPoint, and Grenville visited each third-grade classroom individually to make the presentation.

‘This is a very special dictionary, just for young people like you,’ Meyer told the students.

It’s a gift that has been given to many students in the area over the last five years. This year, Meyer said, the Massena Elks Lodge has presented 360 dictionaries to third-grade students in the Massena Central School District, as well as at Trinity Catholic School and St. Lawrence Central.

The Potsdam Elks Lodge has distributed 505 throughout their area, according to LaPoint, who said close to 40,000 student dictionaries would be presented to third-graders by Elks Lodges throughout New York state.

The dictionaries contain information that will serve the students well not only in third grade, but also in the years ahead, Meyer said. There’s data on planets, stars and constellations, biographical information on presidents, maps and details about countries, and even multiplication tables and symbols used in sign language.

‘There are all kinds of neat things in this dictionary. I think you’ll like it,’ Meyer said.

The Elks provided not only the dictionaries but also a bookmark and a tag inside where students could write their names.

‘When you leave this classroom take it with you. It’s going to be yours forever,’ she said.

LaPoint told the students that the Potsdam Elks really handed out dictionaries to third graders at Norwood-Norfolk Elementary School. They also visited fourth graders to see how they had used their dictionaries over the past year.

One of the fourth-grade students was interviewed for a television news segment about the dictionary distribution, according to LaPoint, who said the young boy showed how he had learned to say his name in sign language as the cameras rolled.

Fourth graders at St. Lawrence were also asked how they had used their dictionaries over the past year. One student said he learned how to use sign language, while another said she used it for spelling.

Even as an adult, LaPoint said he still uses his dictionary when he’s at home watching Jeopardy on television and comes across a stumper of a question.

He asked the third graders to read a book and use their dictionaries to help them comprehend it.

‘Use your dictionary as a study guide,’ he said, ‘because it’s more than just a dictionary.’