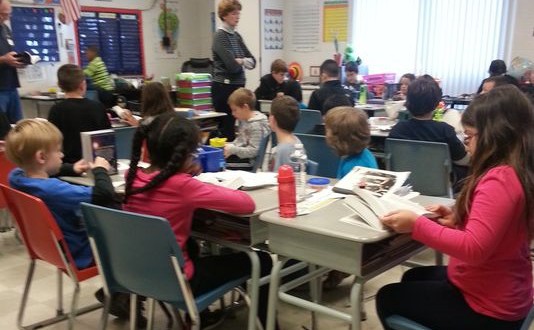 Kiwanis Club of Canton once again has completed its annual donation of dictionaries all across the Plymouth-Canton school district. All of the elementary schools from Allen to Workman were recipients of this year’s book distribution. Walker-Winter Elementary in the Wayne-Westland School District was also included, since it has a large Canton population enrolled. “Students get to discover all of the fun facts in their new dictionaries,” Kiwanis spokesman Mark Ott said. “In fact, all of the third-graders were using their dictionaries to look up words like ‘service’ and ‘volunteer.'” The books include biographies of the presidents, statistics on the states and other countries, so it is a source of information beyond words. Joanna Uhl’s and Vanessa Guastella’s classes at Eriksson School were just two of many in the elementary schools to receive complimentary dictionaries from the Canton Kiwanis Club. “This is my favorite time of the year,” Guastella said. More than 1,200 books were personally distributed to each of the students in their respective classrooms by members of the club. Since the inception of the project, more than 10,000 books have been presented. Evidence suggests that students use the books through middle and high school years. The distribution is done with books purchased through the Dictionary Project. This is a national organization supporting literacy by providing access to affordable books for students. The Kiwanis Club of Canton received a grant from the Kiwanis International Foundation to partially fund the project this year. This grant represents a strong show of support for the validity of the program. The Kiwanis International Foundation supports project all over the world and the grant was awarded through an application process after meeting certain criteria. READ MORE HERE: http://www.hometownlife.com/story/news/local/canton/2014/12/14/canton-kiwanis-dictionary-delivery/20289491/
Kiwanis Club of Canton, Michigan, Plymouth-Canton school district, supporting literacy