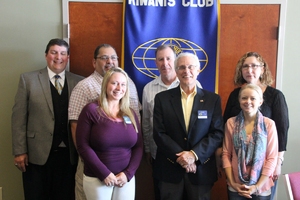 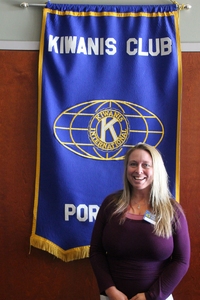 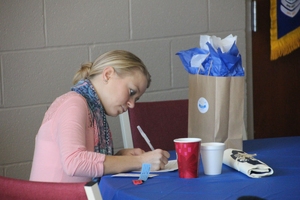 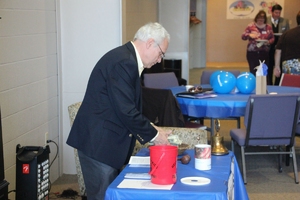 Since its founding in 1915, Kiwanis, a coeducational service club, has been dedicated to changing the world one child and one community at a time. The belief that the most effective way to enhance the prosperity of a community is to enhance its children has been the principle core of the Kiwanis mission since its inception. With over 600,000 members making up nearly 15,000 clubs in over 90 countries, Kiwanians have helped build schools, eradicate diseases, shelter the homeless, and feed the hungry around the world. Children are the top priority to Kiwanis and while their needs vary from country to country, state to state, and community to community local clubs work to identify and act on the needs of young children within their communities.

Since it was chartered in March of 1997, the Kiwanis Club of Portage has worked hard over the last eighteen years to respond to and meet the needs of children in the Portage Community. In that time they have raised and reinvested over $125,000 into the Portage area to help children and families in need.

“Nearly every project we focus on is in some way related to helping children,” said Shannon Burhans, President of the Portage Kiwanis.

Burhans has been a member of Kiwanis for 16 years and President for two.

“We’re very lucky to have a large group of local volunteers who come and make it possible for us to undertake a wide variety of events, fundraisers, and projects throughout the year.”

‘Rebuilding Together’ is one such project that the Kiwanis were able to bring to Portage which helps improve the living standards of local families by making much-needed improvements and remodeling to homes that have fallen into disrepair.

“There’s a huge group of volunteers who go in and they fix anything from painting and yard work to a new roof or remodeling a bathroom,” Burhans said. “We were so happy to be able to partner with that organization and since then the project has been thriving. It’s had a real positive effect on the community.”

By forming partnerships with other local service and nonprofit organizations, Kiwanis has been able to extend the positive reach and impact they have on the Portage community. Around the holidays, the Kiwanis hold a Winter Coat Drive to make sure everyone stays warm and are an active part of the Porter County Salvation Army Bell-Ringing at many local businesses. They also host a free luncheon to benefit the U.S. Marine Corps and their Toys for Tots campaign, as well as sponsoring one local family to make sure they will have all they need for a happy, memorable Christmas.

This spring the Portage Kiwanis helped clean up Portage Township Parks in their ‘Team Up 2 Clean Up’ which took place at Haven Hollow Park. They also recently held their annual Breakfast with the Easter Bunny fundraiser.

“We served over 500 people in 3 hours!” Burhans said. “Our Easter event and the Kiwanis 100th Anniversary Breakfast (on April 28) are huge for us not only because they get people involved but because they help us raise money for our Myron Fessler Scholarship Program where we give out four $500 scholarships to graduating seniors.”

In June, Kiwanis will hold the annual Relay For Life which they have been organizing in Portage for several years now. The Relay will be held from noon to midnight and the theme this year is ‘Favorite Holiday’ so those participating are encouraged to dress in their favorite holiday attire.

Kiwanis’ focus on children means they are very active with students in all of Portage’s local schools.

“We try and get as many kids active in our Service Leadership Programs as we can,” said Burhans. “In elementary schools we have the K-Kids, in middle school the Builders Club and in high school the Key Club. These Clubs give our kids and young adults the opportunity to do some community service and develop some leadership skills. We believe it’s important to start them young and instill a sense a community that will carry on throughout their life. Once that service and leadership is a part of them and they see what good they can do it becomes an important part of who they are.”

One of the most important projects the Kiwanis has been able to bring to Portage is ‘The Dictionary Project.’ This project, made possible by the club’s annual fundraising initiatives, purchases dictionaries for every 3rd grader in each of Portage’s eight elementary schools. Each year the Kiwanis gives out between 450 and 600 dictionaries that students will take with them along their lifelong educational journey.

Kiwanis International will celebrate its 100th Anniversary at a convention in Indianapolis. Kiwanians from all around the globe will convene in mass to celebrate the great work these service-minded men and women have accomplished and to promote the improvement of their communities one child at a time.
Community Involvement, fundraising initiatives, Portage, Service Leadership Program