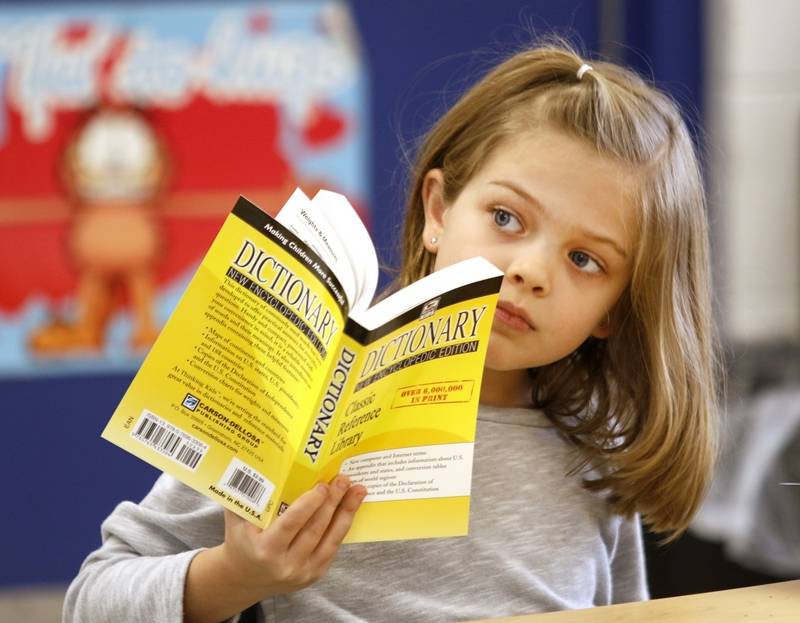 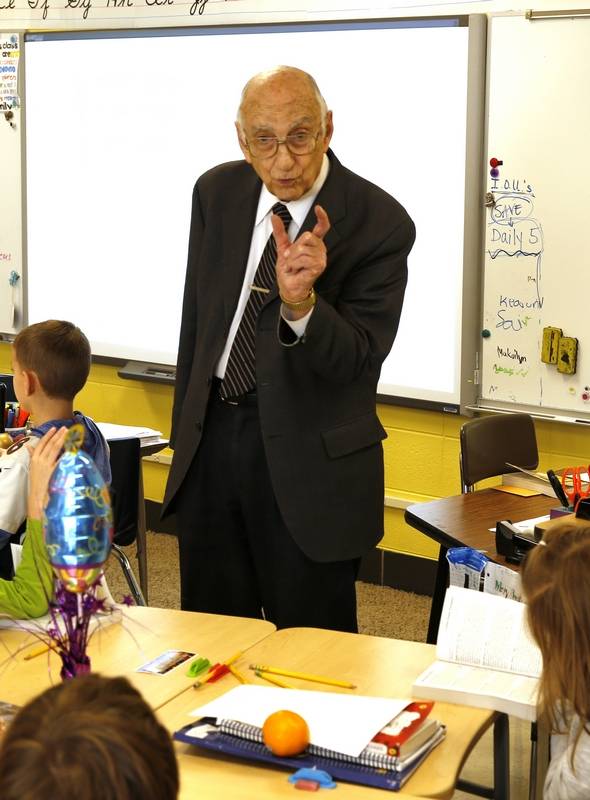 Ted Utchen began his crusade against bad grammar roughly 14 years ago, and since then his quest really hasn’t changed.

“The Dictionary Man” brings little shtick to the vocabulary lesson he repeats every year for students in schools across DuPage County. Just the usual corny jokes and some worn-out index cards — all with an eye toward selling kids on the virtues of proper spelling.

But it’s not his soft-spoken lecture that gets some youngsters fired up about finding a way with words. It’s his gift: Utchen has delivered nearly 12,000 pocketbook dictionaries to third-grade students since 2002.

“I get my own dictionary!” Park View Elementary third-grader Helena Josephus recently squealed as she wrapped both arms around the yellow paperback she received at the Glen Ellyn school.

It’s a common reaction when Utchen personally distributes the dictionaries to students in 27 schools from Carol Stream to Lisle while visiting classrooms from October through December to give students a tutorial about the wonders of language.

“It’s the most worthwhile thing I’ve ever done,” the Wheaton father of two said. “If we can get kids started with dictionaries while they’re young in third grade, they’ll start to use it, and when they grow up, they’ll spell words right.”

Utchen pays $2.54 out of his own pocket for each copy. That’s the discounted price he receives by collaborating with The Dictionary Project, a nonprofit group that has provided more than 28 million dictionaries to children across the country and abroad.
“I don’t pay any attention to that,” Utchen said of the cost.

He did pay attention years ago to a Wall Street Journal article about Mary French, who founded The Dictionary Project in 1995 in South Carolina. That story inspired him to re-create the program here.

He began by approaching former Wheaton Warrenville Unit District 200 Superintendent Gary Catalani with his idea and then got principals on board.

“The kids really do cherish the books that he gives them,” Park View Principal Barb Peterson said.

Grammatical errors are a “hot-button” issue for Utchen, who doesn’t hesitate to point them out to newspaper editors. He also occasionally sends suggestions to the “Grammar Moses” column by Daily Herald Managing Editor Jim Baumann.

But Utchen isn’t out to mold the next Professor Henry Higgins.
The Dictionary Man — as he’s known in schools — wants kids to take away a deeper lesson.

The first word Utchen tells them to look up? “Slovenly,” for no particular reason.

Some students will inevitably ask why they can’t just use the spell checker on their computer instead of flipping through the pages of a dictionary. Utchen has a clever retort — he is a retired attorney, after all — and cautions that such programs don’t always flag mistakes.

“When we read, what do we see on the page? Words. We don’t see a golf club or a pen or pencil on the page,” Utchen said. “We see words on the page. And if we’re reading a story in a book and we come to a word we don’t know the meaning of, we won’t know what the story’s about unless we look it up in the dictionary.”

In their personal dictionary, Utchen instructs students to write their name on the inside cover, preferably in permanent marker, and to take ownership of their language skills.