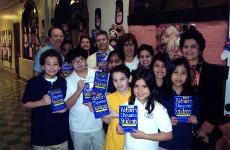 The Belleville Elks Lodge 1123 recently distributed over 400 free thesauruses to all the sixth graders in the Township of Belleville`s grammar schools. The students who received the books were extremely appreciative of the donations.

The thesauruses were purchased through The Dictionary Project.

The Dictionary Project originated in Savannah, Georgia, in 1992 when Annie Plummer gave 50 dictionaries to children who attended a school close to her home.

The Dictionary Project is a non-profit organization and has provided more than 12,012,426 school children throughout the United States dictionaries or similar books free of charge. The cost of the books is generally covered by the many civic organizations in the communities.

The Elks chose the thesaurus as a result of a few suggestions from teachers` thank you notes they had received in the previous years of donating dictionaries.

For more information on The Dictionary Project, log on to the internet at www.dictionaryproject.org.