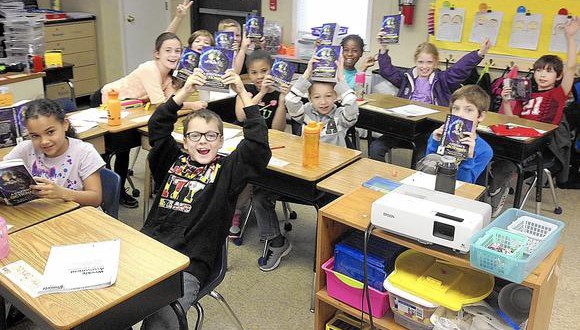 Even in the 21st century, the age of ubiquitous electronics, with smart phones, tablets and laptops seemingly in every hand, it’s good to know that kids still get a kick out of receiving a book of their very own. Smiles certainly abounded as Lothian Elementary School third graders received individual dictionaries as part of the annual dictionary distribution conducted by the South Anne Arundel County Rotary Club. The program is part of the club’s overall commitment to literacy efforts across all age groups. Rotarian Lee Derrick represented the club on the day of distribution. Each student received his or her own copy of “A Student’s Dictionary,” from The Dictionary Project, a nonprofit organization that provides educational books to other organizations like the Rotary Club across the United States. The edition given is first and foremost a dictionary; however multiple topics are covered, including U.S. history, biographies of all United States Presidents; geographical information about State Capitals; plus the complete Bill of Rights and United States Constitution. There’s even a section listing stories about all of the planets. Many students use the books throughout their elementary school years and ultimately pass the dog-eared dictionaries along to younger siblings. Dictionaries also were distributed third graders at Central, Davidsonville, Deale, Edgewater, Mayo, Shady Side and Tracey elementary schools as well as the Summit School and St. Andrew’s Day School.
… READ MORE HERE: http://www.capitalgazette.com/neighborhoods/ph-ac-cc-around-south-county-1204-20141203,0,4479372.story
A Student's Dictionary, Lothian Elementary School, paperback dictionary, Rotary Club, South Anne Arundel County Rotary Club