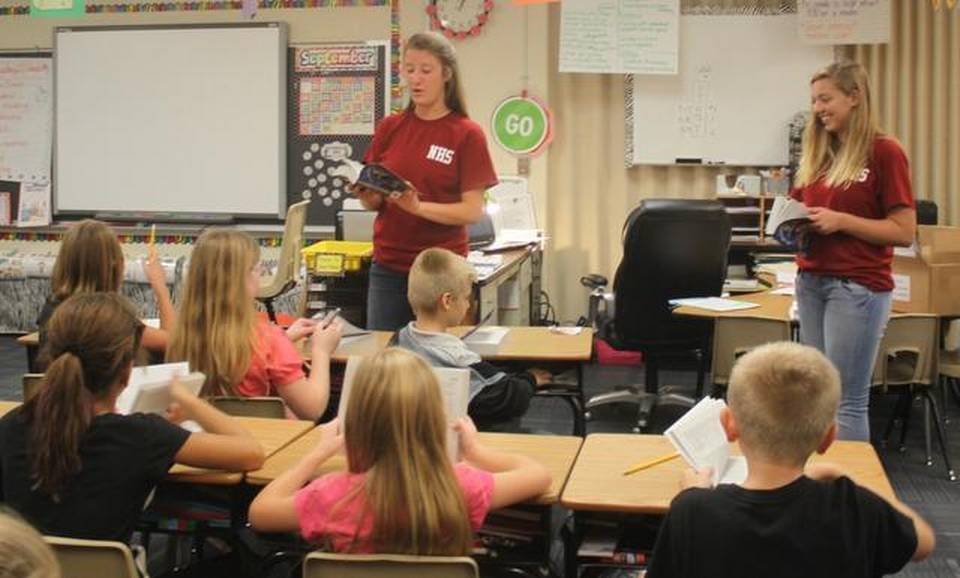 The dictionaries are an edition assembled by the founder of the national Dictionary Project, Mary French. They’re written specifically to be at a mid-elementary level and are small enough to fit into a child’s backpack. Inside, the pages hold more than just words and definitions.

“They have multiplication tables and information about all the states. It has all different kinds of trivia that third-graders love to look up … and they’re helping to fill their inquisitive minds,” said Katie Porter, who teaches third grade at Cottonwood Point Elementary in the Blue Valley School District.

Just over a decade ago, Hope stumbled upon French’s project in South Carolina, which distributes dictionaries to third-graders. Initially, he thought he’d just donate some money, but something about the project appealed to him so much that he decided to localize it for Kansas City.

Initially, Hope planned to offer the program just to a few schools in the two Kansas Citys . When he went looking for support and funding, he found some from his employer at the time, Hallmark, and from then-Kansas City Chiefs player Tony Richardson.

“Every time he was interviewed by any sports radio, TV or newspaper, he always talked about the Dictionary Project …. He gave us a lot of credibility,” Hope said.

The first books were distributed during the 2002-2003 school year.

Richardson provided more than 75 percent of the funding for the first three years. Now, much of the funding comes from community organizations, such as Kiwanis, Rotary and Optimist clubs that want to sponsor the dictionaries for schools in their areas. Hallmark continues to provide storage space for free.

The project has been embraced by the National Honor Society at Lee’s Summit North High School, which raises money for a different charity each month. About five years ago, the student treasurer suggested that the group get involved with Dictionary Project KC.

Normally, the National Honor Society raised $50 to $100 a month, but kicks in an extra $100 to $150 from other fundraisers to boost the donation for dictionaries.

Honor society sponsor Chuck Stephenson said the kids at Richardson Elementary really light up when his students come to present the dictionaries.

“If a teenager ever pays attention to a child, that teenager is a god or goddess (to the child),” he said. “Frequently, the students write thank-you notes (to us), and they’ll use their dictionaries to look up words (for them).”

The cost works out to about $2.50 per book, and Hope, who runs the group from his home, tries to have as few overhead costs as possible — and that means not even taking a salary for the work he does.

“They were so excited to feel like it’s theirs and theirs only … to keep track of the words they’ve learned, to highlight and underline …. It’s one of those little things that mean big things for them. You take it for granted. It makes them feel like they’re growing up.”

The project isn’t just about paying for the dictionaries. Someone from the project or a sponsor organization delivers the dictionaries personally to the school and gives a presentation to the third-graders about how to use a dictionary.

Many kids find the books so inspiring that “when they have silent reading time, they’ll ask ‘Can I read the dictionary?’ That shows how excited they are,” said Karen McGrew, a third-grade teacher at Harmony Elementary in the Blue Valley School District.

Even with the popularity of online dictionaries, Hope said it remains important for the kids to have their own paper copies.

“We’re dealing with 8-year-olds. (Sometimes), they’re still struggling to figure out what alphabetical order means,” he said. “Some of these kids don’t really understand how you look up a word in the dictionaries. If you’re at that point, having a computer doesn’t help you.”

He also likes that kids don’t need anyone’s permission to look things up in their own dictionaries.

“This is an age where kids really want to be independent …. They want to do things on their own,” he said.

“It’s important that we write and are able to speak intelligently. We don’t always have computers to do the editing for us. You have the additional knowledge,” Walsh said.

Now that it’s been more than 10 years since he first started handing out dictionaries, Hope is seeing the project come full circle.

“We now have several high schools whose students go back into the classrooms where they were in school and make presentations,” Hope said.

The first to do that were members of Lee’s Summit North High School’s honor society, who independently contacted Hope with a donation to the project.