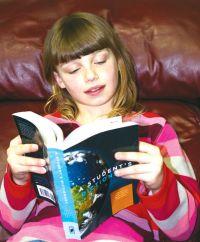 Washington Elementary School third grader Marisa remembers the day over a month ago that the men in the red coats visited her classroom and handed her a dictionary.

Marisa said she has not looked up very many words yet, but she has found a world of knowledge in the book.

‘First of all it has all these words, and then there is a whole lot more,’ Marisa said.

She has been using the book to learn about the United States Declaration of Independence, the planets, sign language and Braille.

‘I’ve learned a lot from this dictionary,’ Marisa said. ‘I’ve even read it during my 15 minutes of reading for school.’

‘Last year every school in Beaver Dam got the dictionaries,’ Radig said. ‘This year we’ve extended to outlying communities.’

Elks Dictionary Project chair Steve Wardlow said the group handed out 264 dictionaries last year to students. This year they will give away more than 700 dictionaries.

Many of the dictionaries were purchased by the Elks, but The Dictionary Project has also donated copies.

The Dictionary Project was founded in 1995 by Mary French of Charleston, S.C., with a mission of distributing dictionaries to as many third graders as possible. The Elks share in this goal.

He said all the local Elks are involved in the project and they talk about the Elks and the dictionaries when they visit the classrooms.

Red coats are worn because they are the state color, Radig said. Coats for Elks in other states are different colors.

‘We also look up words in the dictionary,’ Radig said. ‘We point out all the information that is in the back of the book.’

The items that Boehler enjoyed in the back of the book include a table of weights and measures, maps of the seven continents, information on the 50 states and several other factual sections.

The fun part of passing out the books is receiving the thank-you notes from the students.

‘One kid wrote the thank-you letter in Braille after copying it from that section of the dictionary,’ Radig said.

He added, ‘I had the benefit of delivering them to my daughter’s class. The teacher said the kids loved them. They are being used, and kids are having a good time with them. The reason that it is given to third graders is that is when they are most influenced with learning to read.’

The Elks do many other child-friendly activities including giving out scholarships and promoting anti-drug and drinking campaigns; so the dictionary project fits in with their goals.

‘This is the epitome of what the Elks do,’ Radig said. ‘Youths are very important to us.’